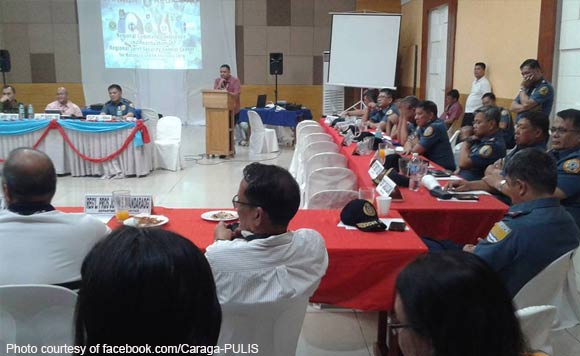 0 556
Share
Want more POLITIKO News? Get the latest newsfeed here. We publish dozens and dozens of politics-only news stories every hour. Click here to get to know more about your politiko - from trivial to crucial. it's our commitment to tell their stories. We follow your favorite POLITIKO like they are rockstars. If you are the politiko, always remember, your side is always our story. Read more. Find out more. Get the latest news here before it spreads on social media. Follow and bookmark this link. https://goo.gl/SvY8Kr

Police Regional Office 13 has started preparation for the upcoming Barangay and Sangguniang Kabataan (SK) elections in May.

Police Chief Supt. Noli A. Romana joined in the regional command conference and re-activation of the Regional Joint Security Control Center (RJSCC) for the polls on Thursday, April 5, held in Butuan City.

Under the RJSCC, the Philippine National Police (PNP) and the Armed Forces of the Philippines (AFP) will provide security coverage to ensure secure, safe and fair conduct of synchronized Barangay and SK elections in Caraga, Romana said.

“The Police Regional Office 13 will intensify its security coverage starting the election period on April 14 until May 21,” he said.

He urged all the Caraganons to cooperate in the security measures to be undertaken by the authorities. #