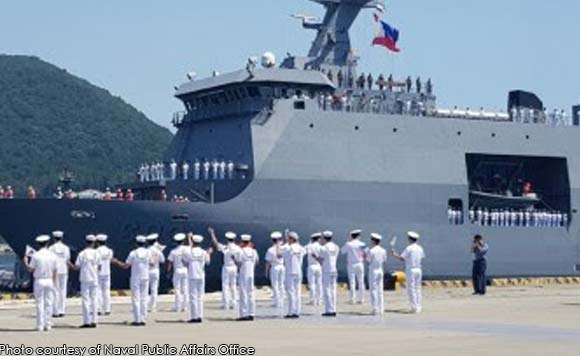 BRP Davao Del Sur (LD-602), one of the Philippine Navy (PN)’s two strategic sealift vessels, arrived at the Jinhae Naval Base, South Korea on Friday afternoon after its successful participation in the Russian Navy Day Celebration in Vladivostok, Russia on July 28, 2019.

In a statement late Saturday, Navy spokesperson, Captain Jonathan Zata said the BRP Davao Del Sur, along with its 300-man contingent, headed by Naval Task Group 80.5 head Captain Richard Gonzaga, was warmly received upon its arrival at the naval base.

This time, she is tasked to escort home the newly-acquired BRP Conrado Yap (PS-39) after its handover, commissioning and send-off ceremony set on August 5. The event will be attended by senior officials from the Philippines and Republic of Korea (ROK).

The BRP Conrado Yap, formerly the South Korean Pohang-class corvette “Chungju” (PCC-762), was donated to the Philippines by South Korea.

The ship measures 88.3 meters long, with a beam of 10 meters and draft of 2.9 meters with displacement at 1,216 tons full load and is rated for a crew of 118 personnel and can sustain operational presence for 20 days.

Jinhae Naval Base is South Korea’s largest navy base and home to the ROK Naval Academy.

This undertaking highlights the desire of the PN to leverage its capability of becoming stronger and more credible naval force that the Philippines can be proud of.

“It further underscores the deepening and dynamic relationship between the PN and ROKN that diplomatic clearance for BRP Davao Del Sur to visit Jinhae Naval Base was approved even on such a short notice,” Zata added. (PNA)