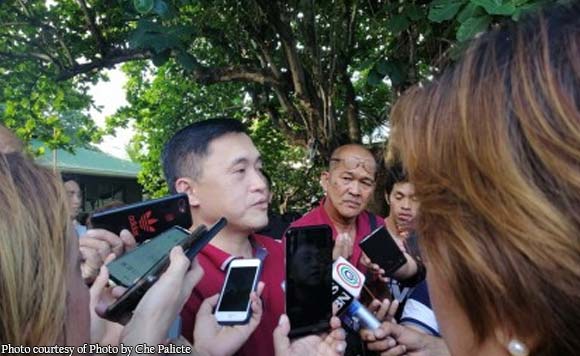 In an interview with reporters here Sunday, Go acknowledged that his support for Ungab was influenced by the formation of the Duterte Coalition that has endorsed the latter’s candidacy.

But the neophyte senator clarified that his support for Ungab should not be misconstrued as meddling in the affairs of the Lower House, noting that both chambers of Congress have the freedom to choose their own leaders.

IGo said his support for Ungab was out of respect for the Duterte Coalition, which was formed by Hugpong ng Pagbabago (HNP) and the Hugpong sa Tawong Lungsod (HTL).

Both parties are Davao-based and founded by the Dutertes.

“I am one with the Dutertes’s effort to unite Congress and for the betterment of the Filipino people,” Go said, referring to HNP and HTL stalwarts, Mayor Sara Z. Duterte and Davao City 1st District Rep. Paolo Duterte.

Although Go said President Duterte has already said he would not interfere with the Speaker race, the senator said the majority of members in the Lower House remains keen on seeking guidance from the Chief Executive.

“They (lawmakers) want to thrust the issue back to the President, hoping he will provide guidance. But the President said all contenders are equally competent, and that he hopes the congressmen will be enlightened in their choice,” Go said in Filipino.

He added: “The choice for the next Speaker of the House is particularly important in the last three years of office of the President, especially on his legislative agenda. We hope that the next Speaker will help the administration push its agenda for the good of the country.”

Mayor Duterte and Davao City 1st District Rep. Duterte on Saturday met with Reps. Lord Allan Velasco, Alan Peter Cayetano, and Martin Romualdez, who are said to be the three frontrunners in the Speakership race.

The creation of the Duterte Coalition led by the Duterte siblings is widely seen as an effort to break the impasse in the Speakership issue.

In a statement last week, the coalition underscored the importance of moving the legislative agenda of the President in the right direction in his last three years in office. (PNA)