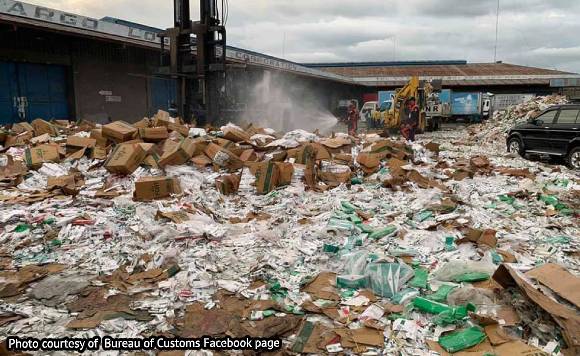 The Bureau of Customs-Port of Zamboanga has destroyed at least P245.8 million worth of smuggled cigarettes.

The confiscated cigarettes were placed outside the fast cargo warehouse where 40-ton forklift equipment crushed the said cigarettes after it was drenched in water.

Barte said this should serve as a warning to smugglers to stop their illegal activities.

He thanked all law enforcement agencies in the city for their continuous support in the anti-smuggling drive of the Bureau of Customs.

He also expressed gratitude to the city government of Zamboanga led by Mayor Beng Climaco for providing the equipment, dump trucks and the access to the sanitary landfill.

The crushed cigarettes were then disposed at the City Sanitary Landfill, Brgy.Salaan, Zamboanga City.