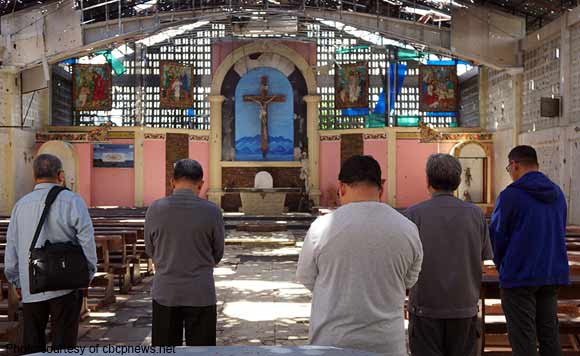 After surviving the five-month clash between government troops and ISIS-inspired Maute forces, the St. Mary’s Cathedral in Marawi City is to be demolished soon.

Marawi bishop Edwin dela Peña consented to the demolition of the cathedral as it is no longer structurally sound.

To be demolished as well is the nearby bishop’s residence.

“We will rebuild the cathedral but only after they have rebuilt their city and their Masjids. For the meantime, we focus our energies on rebuilding communities,” Dela Peña said (http://cbcpnews.net/cbcpnews/st-marys-cathedral-in-marawi-to-be-demolished/).

The church is inside ground zero of the Marawi conflict, which started May 23 and ended in October.

Leveling of the damaged structure and the clearing of debris may start in June, and take up to 10 months.

In the demolished church’s place will rise a “simple” church that seeks to symbolize the church’s reconciling presence in Marawi.

During Saturday’s visit, dela Peña and six other prelates prayed inside the 84-year-old cathedral. While a Mass was planned, the military did not allow them to stay longer for security reasons.

Rey Barnido, executive director of Duyog Marawi, said the bishops also prayed for those who are working for peace in the region.

“It was both a symbol of solidarity of the whole Mindanao Church with the Marawi prelature and at the same time a symbolic blessing and prayer for peace,” he said.