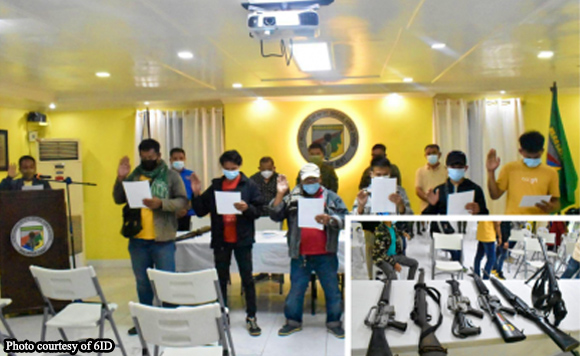 An alleged division commander of the Bangsamoro Islamic Freedom Fighters (BIFF) and five of his followers surrendered to the military in Ampatuan, Maguindanao, Western Mindanao Command (Westmincom) said.

“This feat is a result of the joint effort of the CIDG (Criminal Investigation and Detection Group) Maguindanao-BARMM, Local Government Unit of Datu Piang headed by Mayor Victor Samama, the 6th Infantry Battalion led by Lt. Col. Charlie Banaag, and the intelligence units,” said Balisi.

Maj. Gen. Juvymax Uy, Commander of the Joint Task Force Central, said the military will help those who surrendered to go back to their normal lives by providing them with livelihood opportunities.

To date, he said a total of 42 BIFF personalities surrendered to the JTF Central.