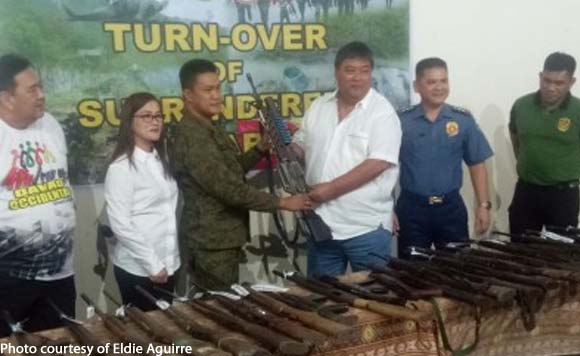 0 226
Share
Want more POLITIKO News? Get the latest newsfeed here. We publish dozens and dozens of politics-only news stories every hour. Click here to get to know more about your politiko - from trivial to crucial. it's our commitment to tell their stories. We follow your favorite POLITIKO like they are rockstars. If you are the politiko, always remember, your side is always our story. Read more. Find out more. Get the latest news here before it spreads on social media. Follow and bookmark this link. https://goo.gl/SvY8Kr

Governor Claude Bautista, who made the offer Friday, said top NPA leaders operating in Davao Occidental are qualified to avail of the incentive.

“I will give PHP2 million, house and lot, plus the opportunity to work in the province to the top brass of the NPA if he or she will surrender to authorities,” Bautista said.

The governor said rebel leaders occupying the second-highest positions in the provincial hierarchy will also receive PHP1 million, house and lot, and scholarship for their children.

“Although the provincial government has declared the communist rebels’ persona non grata, I am giving them the best chance they could get from the government as long as they will faithfully surrender,” he said.

Bautista said he takes pity on “those who have been fooled by the wrong ideology of the communist movement wherein they sacrificed themselves fighting against the government for a cause that will not be resolved unless everybody will work for it.”

“With that huge amount of money, they could start a new life with their respective families without fear of being chased by government forces. They must grab it now or lose the chance to be back in the mainstream society,” he added.

Lt. Col. Ronaldo Valdez, commander of the Army’s 73rd Infantry Battalion based in Malita town, Davao Occidental, said the military will continue to assist NPA rebels who decide to surrender.

“Those who surrendered were given financial assistance from the provincial government, aside from the PHP50,000 capital outlay,” Valdez said, adding rebel surrenderers are also given livelihood training and educational assistance under the Enhanced Comprehensive Local Integration Program (ECLIP).

Valdez said the firearms came from NPA surrenderers within the Davao Occidental area.

“We are expecting more NPA to surrender knowing that they are fighting a useless cause,” the Army official said.

Of the five local government units in Davao Occidental, Valdez said a few NPA units are operating within the area of Jose Abad Santos town. Malita, Don Marcelino, and Sta. Maria while the town of Sarangani shows no rebel activities. (PNA)

Uno Duterte is a carbon copy of mom January