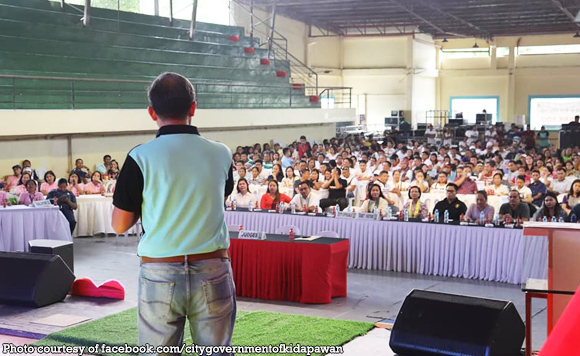 0 87
Share
Want more POLITIKO News? Get the latest newsfeed here. We publish dozens and dozens of politics-only news stories every hour. Click here to get to know more about your politiko - from trivial to crucial. it's our commitment to tell their stories. We follow your favorite POLITIKO like they are rockstars. If you are the politiko, always remember, your side is always our story. Read more. Find out more. Get the latest news here before it spreads on social media. Follow and bookmark this link. https://goo.gl/SvY8Kr

The city government of Kidapawan has conferred awards to best performing barangays in the city.

The 2019 Best Performing Barangays award is in recognition of the Barangay Governance Performance Assessment for the LGU Award and Incentive Program that is centered on Core Areas such as Revenue Generation, Public Safety and Disaster Preparedness, and Health, and Essential Areas covering the Barangay Council for the Protection of Children Functionality, Education and Community Participation, among others.

“We are giving out the awards in recognition of the exemplary performance of our barangay officials. The incentives will help them give better services as well as implementing priority programs that will improve the lives of their constituents”, City Mayor Joseph Evangelista said in a message to barangay officials.

Barangay Linangkob, which was chosen as the over-all winner, received P200,000 cash aside from the Plaque of Recognition from the city government.

All barangays underwent the required evaluation of core and essential areas before the awards were given.