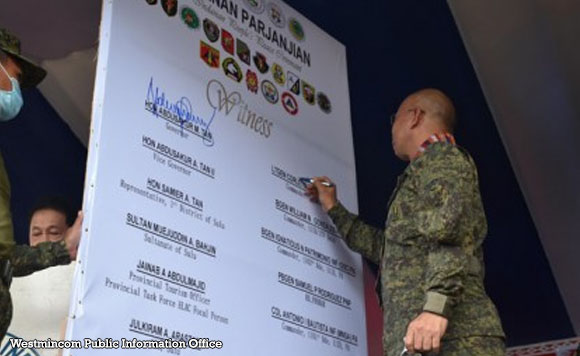 “We are declaring these terrorists as persona non grata here in Indanan and we vow to support the military, police, and other security agencies in bringing lasting peace and progress in our beloved municipality,” the Westmincom quoted Jikiri as saying.

“This peace covenant is for us all, for “Lupah Sug”, and for the “Bangsa Sug”. Never did we have this kind of peace covenant signing in the past. Now is the time for us to unite. We, leaders, elders, barangay officials, local government units, the AFP, the PNP, religious leaders, and the people must all unite,” Tan added.

Lt. Gen. Corleto Vinluan Jr., commander of the Western Mindanao Command (Westmincom), said peace can be attained if they (stakeholders) will let “synergy work out and bring forth significant breakthroughs.”

“I would like to extend my appreciation to our committed partners for your trust and support to the military and other security agencies. Convergence will continue to substantiate our peace efforts and lead to a brighter future for the Suluanons,” Vinluan said. (PNA)