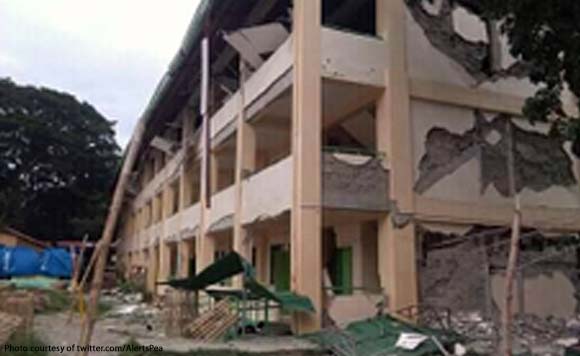 DAVAO CITY — Villagers of Padada town in Davao del Sur who were affected by the 6.9-magnitude earthquake on Sunday will be given immediate assistance by the city government here, an official said Sunday evening.

Padada was badly hit by the strong tremor which struck at 2:11 p.m. which displaced hundreds of families and damaged hundreds of properties.

As of posting time, a six-year-old girl named Cherbelchen Imgador of Barangay Asinan in Matanao, Davao del Sur has been confirmed to have died during the earthquake. The Davao del Sur Provincial Information Office said that the victim was not able to get out of their house which collapsed when the quake struck.

“There is an ongoing assessment right now for us to determine as to how many rescuers and equipment is needed by Padada and if we will be able to identify it, they can directly go to the municipality to extend help,” Duterte said.

He added, however, that he will also make sure there is sufficient number of rescuers left in this city.

Aside from sending rescuers, Duterte likewise assured that cash assistance and relief goods will be given to the quake-affected villagers.

“I am not yet certain of the other affected areas but rest assured that we will provide aid for them. The relief goods might be delivered tomorrow,” he said.

Duterte has earlier declared the suspension of classes in all levels on Monday to pave the way for the inspection of various structures by the City Engineer’s Office (CEO).

He said that anybody can tap the CEO if they wish to get their buildings inspected.

“Whatever the advice of the CEO, we must adhere to it. What’s more important here is for us to be safe,” Duterte said.

He also advised Dabawenyos to refrain from going inside big structures unless there is a clearance from CEO that they are safe.

The acting mayor urged the public to continue living normally but at the same time to be vigilant at all times.

No casualty/injured and fire occurred in this city after the tremor.

However, the Mahayahay Bridge, a major infrastructure located on Carlos P. Garcia Road here was closed to vehicles due to the presence of cracks. It has caused heavy traffic in the city. Various malls were also found damaged following the strong earthquake.

“We cannot predict its [earthquake] occurrence. We have to accept that and let us be vigilant and live normally,” Duterte said. (PNA)