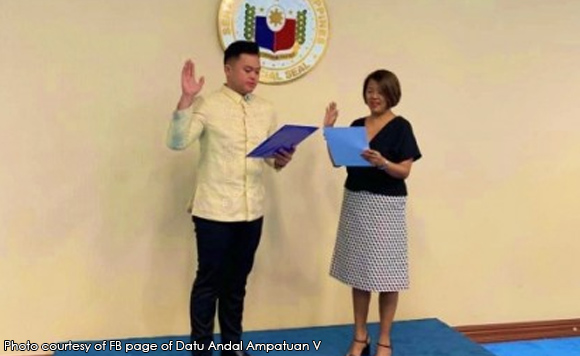 0 433
Share
Want more POLITIKO News? Get the latest newsfeed here. We publish dozens and dozens of politics-only news stories every hour. Click here to get to know more about your politiko - from trivial to crucial. it's our commitment to tell their stories. We follow your favorite POLITIKO like they are rockstars. If you are the politiko, always remember, your side is always our story. Read more. Find out more. Get the latest news here before it spreads on social media. Follow and bookmark this link. https://goo.gl/SvY8Kr

ISULAN, Sultan Kudarat – The recent assumption of Datu Andal “Datu Aguak” S. Ampatuan V as mayor of Datu Unsay, Maguindanao, is valid and legal under the rule of a succession of the local government code.

This was clarified by Ministry of the Interior and Local Government–Bangsamoro Autonomous Region in Muslim Mindanao Minister Naguib Sinarimbo, following the swearing-in of the young Ampatuan before Senator Nancy Binay at the house of the senator on Tuesday in Manila.

Sinarimbo said he is yet to receive a copy of the resignation letters of Mayor Fuentes Dukay and his father, Vice Mayor Wanay Salibo Dukay. The Dukays submitted their letters of resignation to Maguindanao Governor Bai Mariam Sangki-Mangudadatu for still unknown reasons.

“As far as I know, both father and son (Dukay) filed their resignation last week to the governor,” he said.

With both resignations, Sinarimbo said it was only logical for Ampatuan to sit as mayor after garnering the highest number of votes as number one councilor during the May 2019 polls.

“Under the rule of a succession of RA 7160 or the Local Government Code it is granted because there are permanent vacancies in the top two posts,” he said.

A Facebook post of Ampatuan also showed him expressing his appreciation to Senator Binay for his oath-taking as the new mayor of Datu Unsay town.

“I would like to express my warmest and heartfelt gratitude to Senator Nancy S. Binay for leading my oath-taking as the Municipal Mayor of Datu Unsay, Maguindanao,” he said in a Facebook post.

The young Ampatuan is the son of jailed Andal “Datu Unsay” Ampatuan Jr., the former mayor of the town and a principal suspect in the infamous November 2009 Maguindanao massacre, and the late Bai Reshal Santiago-Ampatuan, also a former mayor of the same town, who died of cardiac arrest on April 2018.

The new vice-mayor of Datu Unsay, still under the rule of succession, is Bai Janine Ampatuan Mamalapat.
(PNA)