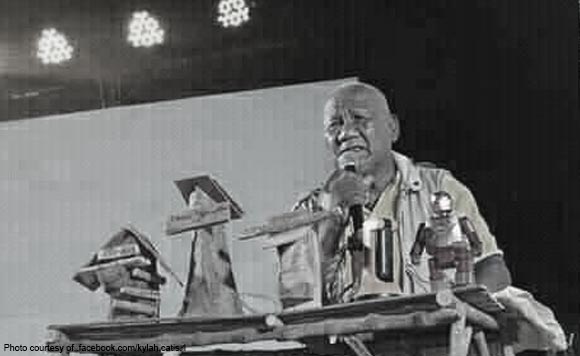 Jacky Lim, Tumaga barangay chairperson, said Bayot succumbed to kidney failure and aneurysm around 7:15 a.m. at the Zamboanga City Medical Center (ZCMC) where he was confined since Sunday.

Bayot has earned the moniker as the “barefoot councilor” since he is frequently seen walking barefoot while voluntarily undertaking
greening projects in the barangays together with some of his staff.

Bayot, born on May 29, 1942, haD served as a teacher at Tumaga Elementary School before he joined politics.

Fondly called as “Rudy”, HE served a councilor (kagawad) in Barangay Tumaga for one term and was elected in 1992 as the village chairperson and has served for 12 years until 2004.

In 2004, Bayot was elected as councilor in Tumaga and served until 2007, where he ran for vice mayor on the same year but was defeated.

He was elected as city councilor in 2010 and served for three consecutive terms until 2019. He ran for congressman in this city’s first district and was defeated in 2019.

Bayot, then a village chairperson, hit the newspapers’ headlines in the 90s when he picked up in Tumaga the unattended and abandoned corpses of two summary execution victims and left it in front of City Hall.

On his last term as city councilor, he became controversial when he accidentally stepped on the national flag that fell from his hands while deliberating during a regular session of the city council.

Meanwhile, Lim said Bayot will be interred on May 26 at the Forest Lake Memorial park after a funeral mass at 1 p.m.

Lim said that Bayot’s funeral will pass by the City Council compound and will directly proceed to the Forest Lake Memorial Park. (PNA)