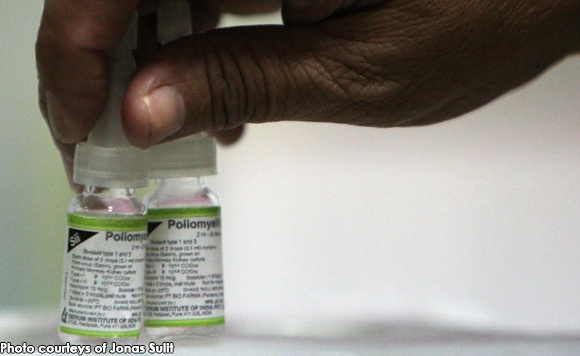 0 112
Share
Want more POLITIKO News? Get the latest newsfeed here. We publish dozens and dozens of politics-only news stories every hour. Click here to get to know more about your politiko - from trivial to crucial. it's our commitment to tell their stories. We follow your favorite POLITIKO like they are rockstars. If you are the politiko, always remember, your side is always our story. Read more. Find out more. Get the latest news here before it spreads on social media. Follow and bookmark this link. https://goo.gl/SvY8Kr

The Bangsamoro government will conduct mass polio immunization campaign to prevent the outbreak of poliovirus in the region.

Children aged zero to five years old will be given free vaccination against polio, the official said.

The immunization campaign will be done following the Department of Health’s (DOH) confirmation of a poliovirus case involving a 3-year old girl from Lanao del Sur on September 16, the first polio case since its eradication in the Philippines 19 years ago.

The MOH-BARMM and the Regional Darul Ifta earlier issued a Fatwa or Islamic ruling on immunization on March 12 to promote the importance of vaccination as a halal and safe way for Muslims to prevent some common diseases.

The Fatwa was issued after many parents in the region expressed hesitation to have their children immunized because they were not sure if vaccination was consistent with their faith.