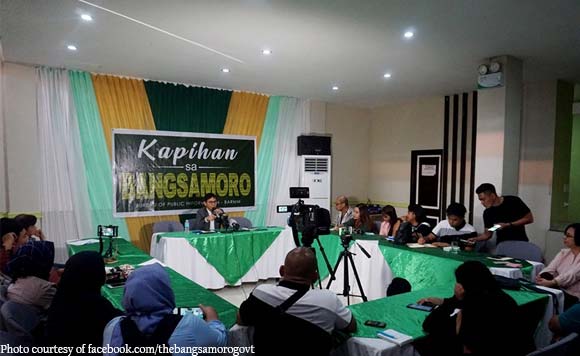 0 150
Share
Want more POLITIKO News? Get the latest newsfeed here. We publish dozens and dozens of politics-only news stories every hour. Click here to get to know more about your politiko - from trivial to crucial. it's our commitment to tell their stories. We follow your favorite POLITIKO like they are rockstars. If you are the politiko, always remember, your side is always our story. Read more. Find out more. Get the latest news here before it spreads on social media. Follow and bookmark this link. https://goo.gl/SvY8Kr

For the first time, the Bangsamoro government and the Mindanao Humanitarian Team (MHT) have conducted a joint meeting in Basilan to signify that peace and order situation in the island provinces in the Bangsamoro Autonomous Region in Muslim Mindanao (BARMM) has improved already.

The meeting, which was held on September 5, was attended by the representatives from the United Nations and other International Non-governmental Organizations (INGOs).

“It is an important step to signify that there is relative peace in the islands, and that people from different countries can actually go there,” BARMM spokesman and local government minister Atty. Naguib Sinarimbo said during the 4th Kapihan sa Bangsamoro Tuesday, September 10.

“For a long time, the UN agencies as well as INGOs were prohibited to send their personnel in the island provinces for security reasons,” Sinarimbo added.

He said the reason for conducting meetings in the island provinces was for the Bangsamoro government and its partners from the humanitarian sector to see the actual conditions of the communities so that they can respond better to the people’s needs.

He said the next joint BARMM-MHT meeting will be held in the island province of Tawi-Tawi.