Bang! Bang! Inday Sara shows off rifle to battle terrorists in Mindanao but… 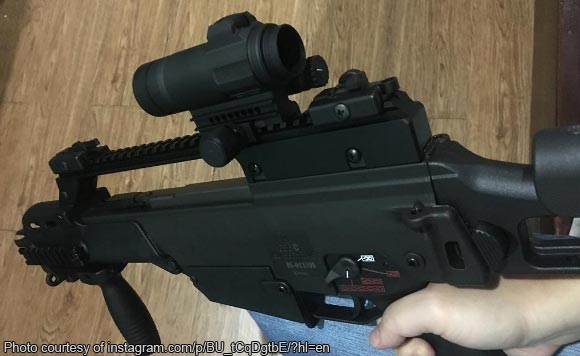 When worse becomes worst, expect your favorite lady politiko to defend you more than how a real man does.

Davao City Mayor Inday Sara Duterte posted on Instagram a photo of a Heckler and Koch assault rifle after she was “advised to prepare for everything.”

“I am going down with this, baby,” she said. “Mindanao will never be the same.”

The lady mayor and daughter of President Duterte is talking about the ongoing siege in Marawi City brought by the Maute group.

The President had declared martial law in the whole Mindanao island to easily defeat the terrorists.

Supporters rally behind Inday Sara saying it was the “right and just thing to do.”

Others called to include the “yellowtards” — a derogatory term for members and supporters of the Liberal Party — on the hit list.

One even named Sen. Antonio Trillanes IV, a staunch critic of the President, to be killed.

Inday Sara, however, said the gun-toting “was just for photo op,” adding it was not right.

Nanghinayang ang supporters, Mayor. But what she did what is legal and right.

Advised to prepare for everything, I'm going down with this baby 😍 Mindanao will never be the same again 😔