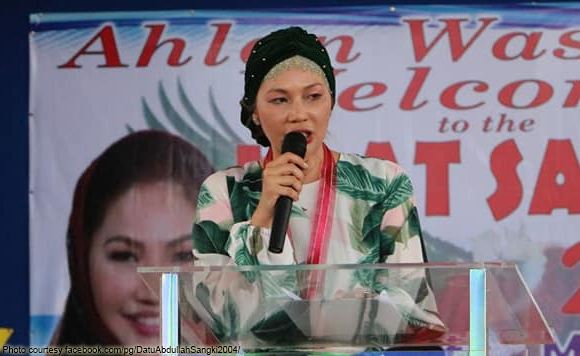 Sangki-Mangudadatu made history as the first-ever lady governor of the 46-year-old province after winning over his closest rival, Freddie Mangudadatu, by more than 54,000 votes in the province’s 36 municipalities during the May 13 mid-term polls.

“From now on, the welfare of the people of Maguindanao always come first before anything else,” she said when interviewed by reporters here following her proclamation.

The Comelec’s Provincial Board of Canvassers (PBOC), which held the 4 p.m. proclamation at the Shariff Kabunsuan Complex, the seat of the Bangsamoro Autonomous Region in Muslim Mindanao here, said Sangki-Mangudadatu garnered a total of 256,338 votes to clinch the gubernatorial post as against Freddie’s 201,565 votes.

Also proclaimed were Datu Lester Sinsuat as vice governor-elect of Maguindanao and Datu Ronnie Sinsuat as Congressman-elect of the province’s first district.

Hours earlier on the same day, the PBOC correspondingly proclaimed outgoing Maguindanao Governor Esmael Mangudadatu as the Congressman-elect of the province’s second district together with his son, King Jazer, as board member for the same provincial district. (PNA)

By the skin of her teeth: Catamco beats Taliño for gov in North Cotabato