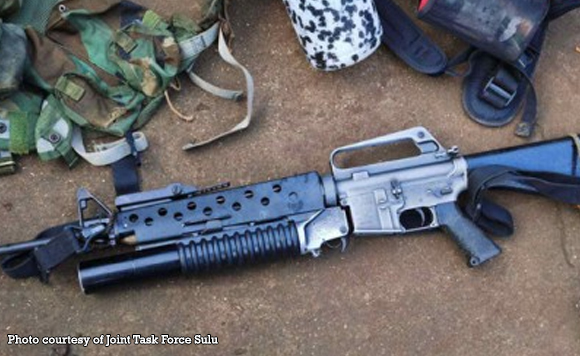 ZAMBOANGA CITY — An Abu Sayyaf Group (ASG) bandit was killed while a soldier was wounded in a clash in the province of Sulu, military officials announced Wednesday.

Maj. Gen. Corleto Vinluan, Joint Task Force Sulu commander, said the firefight broke out around 7:36 a.m. Tuesday in Barangay Tumatangis, Indanan, Sulu, when the troops spotted some 20 ASG bandits while on security operation in the area.

Vinluan said the ASG bandits fled to different directions after the nine-minute clash, leaving behind the remains of a slain comrade and an M-16 Armalite rifle with attached M-203 grenade launcher.

A soldier was injured in the firefight, but Vinluan was unable to release his identity except to say that he belongs to the Army’s 41st Infantry Battalion.

Lt. Gen. Cirilito Sobejana, commander of the Western Mindanao Command (Westmincom), has assured they have sufficient forces to pursue the ASG bandits, “who are taking advantage of the situation wherein some of our troops are deployed to assist the local government units in the battle against 2019 coronavirus disease (Covid-19).

“Rest assure our focused military operations will not falter, we have enough forces to hunt and pound these terrorists, and we will compel them to lay down their arms and return to the folds of the law,” Sobejana said.

Vinluan vowed the troops will continue to track down the ASG bandits who are still holding captive five Indonesian fishermen.

The ASG bandits seized the five Indonesian fishermen on the waters of Lahad Datu, Sabah, Malaysia on January 17 this year. (PNA)