Artist turns over to GenSan ‘Bangkapayapaan’ 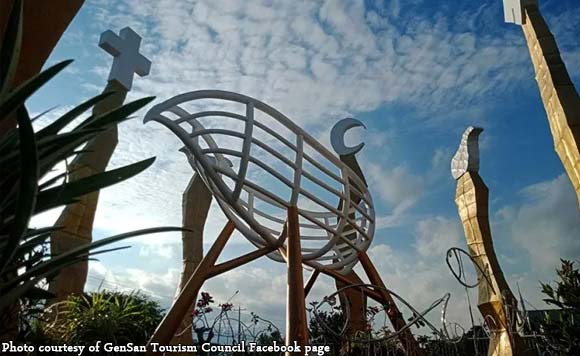 0 204
Share
Want more POLITIKO News? Get the latest newsfeed here. We publish dozens and dozens of politics-only news stories every hour. Click here to get to know more about your politiko - from trivial to crucial. it's our commitment to tell their stories. We follow your favorite POLITIKO like they are rockstars. If you are the politiko, always remember, your side is always our story. Read more. Find out more. Get the latest news here before it spreads on social media. Follow and bookmark this link. https://goo.gl/SvY8Kr

The landmark is named as “Bangkapayapaan,” the first of Millan’s series of peace monuments built in different areas in Mindanao.

The “Bangkapayapaan” concept and design that encompasses the symbolism of unity amidst diversity was presented to, and was approved by the 18th Sangguniang Panlungsod, under the leadership of the former Vice Mayor Shirlyn L. Bañas who champions strong advocacies for arts and tourism, the city government said.

Rivera thanked Millan for his generosity and kindness in donating the said landmark.

Councilor Shandee O. Llido-Pestaño, Chairperson on Tourism, Culture and the Arts, said the location of the landmark is perfect because it connects the airport (westward), fishport (southward), neighboring municipalities (northward), and other developing barangays (eastward).

Millan’s other famous artworks in Mindanao include the the 25-foot durian sculpture at Davao International Airport among others.

Mayor Gandamra warns nearby towns from dumping garbage in Marawi