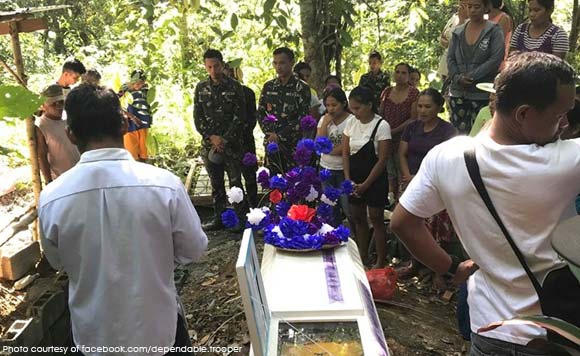 0 627
Share
Want more POLITIKO News? Get the latest newsfeed here. We publish dozens and dozens of politics-only news stories every hour. Click here to get to know more about your politiko - from trivial to crucial. it's our commitment to tell their stories. We follow your favorite POLITIKO like they are rockstars. If you are the politiko, always remember, your side is always our story. Read more. Find out more. Get the latest news here before it spreads on social media. Follow and bookmark this link. https://goo.gl/SvY8Kr

The military has extended assistance to the family of slain member of the communist New People’s Army (NPA) in Bukidnon.

The army troopers of the 8th Infantry Battalion (IB) provided security during the wake and burial of Jenos Bade, a rebel who died in the recent encounter of the soldiers against the NPA in Talakag, Bukidnon on August 13.

The military troops also brought sack of rice and coffee during the vigil for Bade.

They also facilitated the burial assistance coming from the Department of Social Welfare and Development (DSWD) amounting to P8,000.00.

Lieutenant Colonel Ronald Illana, the Commanding Officer of the 8th IB, expressed his sadness and extended his condolences to the family.

“We are saddened by what happened and we pray that may his soul to rest in peace. This could not have happened if he heeded our call to surrender,” he said.

Illana urged the other NPA rebels to surrender as the government would help them.

Japan provides equipment for power distribution to BARMM, other areas