Army, DSWD and LGU helping each other in reaching out IPs in distant villages in Agusan del Sur 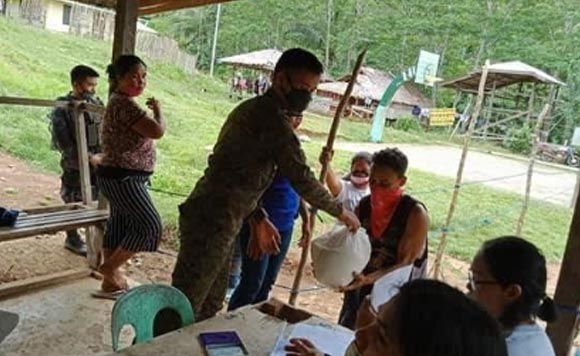 The Philippine Army’s 26th Infantry Battalion together with the personnel of the local government unit of San Luis and personnel from DSWD Caraga regional office were assisting each other to reach out far flung indigenlous people’s communities for the distribution of relief goods and cash assistance from the DSWD’s Social Amelioration Program (SAP).

The other day, April 23, 2020 group of DSWD and LGU of San Luis personnel were escorted not only providing security but also helped in carrying cargoes of relief goods containing rice, canned goods and other food items to IP villages in Barangay Mahagsay, San Luis, Agusan del Sur.

From the national highway said communities were upland members of the Banwaon Tribes are residing is about 35 kilometers away in sometimes rough and difficult mountainous roads and terrain.

Lumad residents as well as non-IPs of said barangay is one of the most affected in the ongoing Enhanced Community Quarantine due to limitations and restrictions in going to public areas to buy their basic commodities, says the press release forwarded to this POLITIKO.com reporter by 1Lt. Percival J Carido who is Civilian Military Officer of the 26th IB, 4ID, Philippine Army based in Camp Isaias C Masendo,Zamora, Talacogon, Agusan del Sur with mobile phone numbers 09078466095 (Smart) 09565926414 (Globe) indicated in the press release for any verification.

“Despite distance, nothing can hinder our determination in reaching out to far flung IP villages in order to carry out our mission “,says San Luis Municipal Social Welfare and Development officer Alicia Bago.

Those who received relief goods were some 117 households of Barangay Mahagsay while 90 qualified beneficiaries getting SAP cash assistance of P5,000 each.

Barangay Captain Lito Mansiliohan of Mahagsay said ” We very grateful to our LGU, DSWD, Philippine Army and PNP in reaching out us here despite road condition. They still find a way in reaching this place”.

For his part, Lt Col Romeo C Jimenea, Commanding Officer of 26IB said, “This action of the local government of San Luis is a manifestation that public service is intended to serve all, beyond conditions, that may become hindrance for others to achieve. And as active partner of the LGUs, we will ensure the success of every rendered government service free from any disturbance”. (-30-)