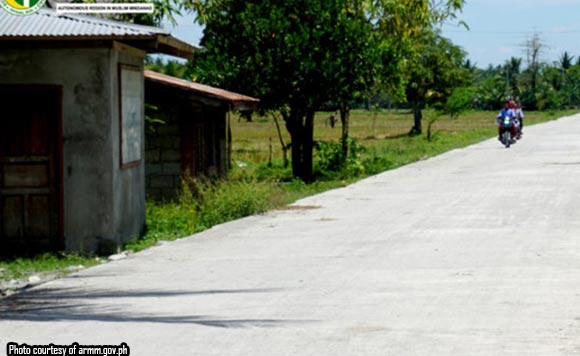 The Autonomous Region in Muslim Mindanao is eyeing the completion of 8 km in road projects in 10 conflict-affected towns within 2018.

ARMM said some 22.5 km had been paved out of the 30.1 km of road projects under the Humanitarian and Development Action Plan (ARMM-HDAP).

Some P371.1 million has been earmarked by the regional government for the concreting of roads in the conflict-affected areas.

“These municipalities suffered from both man-made and natural disasters in previous years,” ARMM said (https://armm.gov.ph/road-projects-conflict-affected-areas-maguindanao-completed-year/).

HDAP was drafted immediately after the Mamapasano incident on Jan. 25, 2015, where 44 elite Special Action Force personnel were killed.

The ARMM estimated some 125,000 residents were displaced in the wake of intensified military operations against terrorist elements in the area.

ARMM-HDAP provides follow-through interventions in affected communities and aims to establish a systematic and a coordinated approach in addressing and mitigating the effects of future disasters and calamities.

“The projects will make the transport of products easier, thereby, increase profits,” Mlok said, noting the projects would also address issues of peace and development in the communities.

“HDAP has helped barangays in uplifting livelihoods across 15 towns in Maguindanao and continues to contribute in creating stable and sustainable communities across the region,” ARMM said.

As good as passed: Migz Zubiri sure of senators’ support for BBL