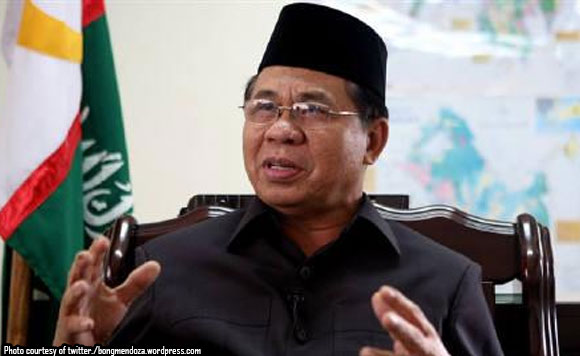 0 292
Share
Want more POLITIKO News? Get the latest newsfeed here. We publish dozens and dozens of politics-only news stories every hour. Click here to get to know more about your politiko - from trivial to crucial. it's our commitment to tell their stories. We follow your favorite POLITIKO like they are rockstars. If you are the politiko, always remember, your side is always our story. Read more. Find out more. Get the latest news here before it spreads on social media. Follow and bookmark this link. https://goo.gl/SvY8Kr

The chief of the Philippines’ main Muslim rebel group warned Tuesday that jihadists loyal to the Islamic State group, flush with looted guns and cash, could seize another Filipino city after Marawi last year.

At the same time IS gunmen were making their way into the southern Philippines from Malaysia and Indonesia, he added, but gave no estimates.

A five-month siege flattened the city of Marawi on the southern island of Mindanao, the Philippines’ main Islamic centre, and claimed more than 1,100 lives.

Murad told reporters conditions on the ground were still ripe for another Marawi-style siege.

“This ISIS group continues to penetrate us because they are being displaced in the Middle East and they want to have another place,” Murad said, using an another name for IS.

“The chances of having another Marawi cannot be overruled.”

“It’s very sad. In our country some people say buying weapons and ammunition is just like buying fish in the market.”

The combination of weak central government authority, the presence of rebel groups and long-running blood feuds means Mindanao is awash with weapons, he added.

Murad urged President Rodrigo Duterte’s government to speed up the passage of a Muslim self-rule law to flesh out the peace accord, warning pro-IS militants were recruiting for a new attack.

“If the (self-rule law) will not be passed now I think it will develop a situation where these extremist groups can recruit more adherents, because it will prove their theory that there is no hope in the peace process,” he said.

“Since they have the capability also to supply money and then they also have the ability to make explosives, bombs, they can just use these young recruits to work out their plan.”