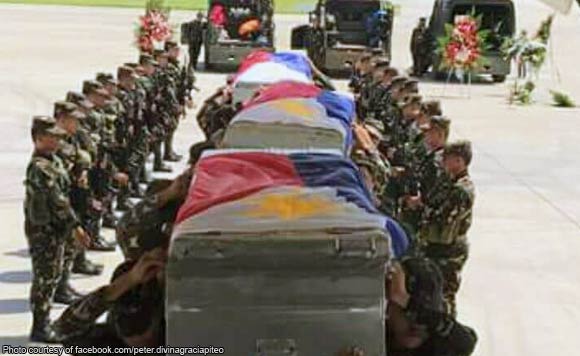 A local charity institution and a beverage company donated P1 million to the families of troops who were killed-in-action during the five-month Marawi siege, the Armed Forces of the Philippines (AFP) said Sunday.

“The foundation and beverage company, who requested to remain anonymous despite the large amount of donation, also pledged to support the AFP’s educational program that will benefit dependents of soldiers, especially those of combat casualties,” AFP public affairs office chief Col. Edgard Arevalo said in a statement.

This was the third time that they donated for the beneficiaries of soldiers who were killed-in-action in Marawi, Arevalo said.

The donation has been deposited in the AFP’s Marawi Casualty Landbank account which was opened in June in order to extend assistance to the families of troops who died in the line of duty.

“The Vice Chief of Staff AFP expressed gratitude on behalf of the soldiers and their families who will benefit from the donation,” Arevalo said.

“The AFP is immensely grateful for the gestures of generosity and kindness of these donors and many others who selflessly and silently give their material and monetary support to our soldiers,” he added. (PNA)

Sara Duterte to strictly impose firecracker ban: Davao City will not be used as transit point