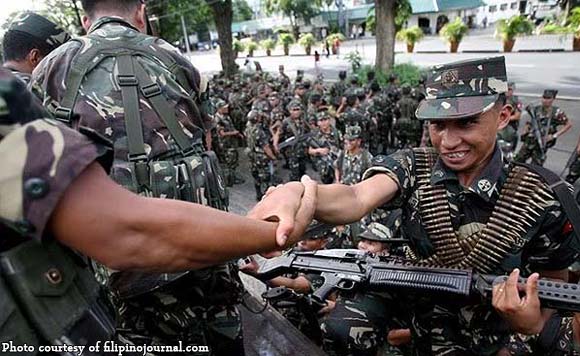 CAGAYAN DE ORO CITY — Police and military authorities have issued a guide for local businesses in Bukidnon province in dealing with the extortion activities of the communist New People’s Army (NPA).

In a statement on Saturday, the Army’ Infantry Battalion (8IB) said it jointly released the guide along with the Philippine National Police (PNP) during the January 22 meeting of business owners under the Bukidnon Lateral Organized for Development (Buklod).

The guide, 8IB said, is contained in a simple infographic detailing the process that each business operator must do if they received a demand for “revolutionary tax” from the NPA, the armed wing of the Communist Party of the Philippines (CPP).

According to the infographic, business owners should preserve the letters, text messages, or phone calls of actual extortion demands, immediately report these to authorities, who will then verify, investigate, and provide relevant feedback.

The 8IB said the NPA’s extortion schemes involve sending out demand letters to local businesses to pay revolutionary taxes. Those who fail to pay up usually get their facilities or equipment burned down.

Authorities added that the scheme is more common among contractors of government infrastructure projects, who often face delays due to the constant harassment from the NPA.

“We are urging everybody to help us stop the finance of the NPA by reporting and preserving all calls, text messages and CCTV’s images because we need them to identify the suspects, report it to nearest Army and PNP offices,” said Lt. Col. Ronald Illana said, commanding officer of the 8IB.

Buklod president Doy Lopez has called on his 21-member businesses to post the “extortion guide” on their establishments, including the police and military hotlines to generate awareness and among their employees.

“Being the president of this organization, I am encouraging everybody to help our Army and PNP, and do not be afraid to report and cooperate with them. It’s not only the NPAs who are doing extortion but there are other criminal groups and individuals also,” Lopez said.

The CPP-NPA is listed as a terrorist organization by the United States, the European Union, United Kingdom, Australia, Canada, New Zealand, and the Philippines.