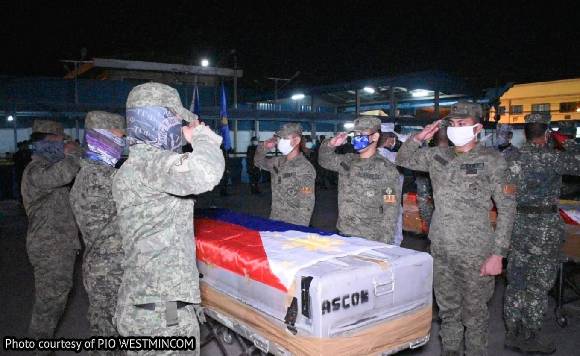 Eight slain soldiers in Sulu encounter were airlifted to Manila on Saturday night, April 18, via a military aircraft, according to Western Mindanao Command (Westmincom).

The send-off ceremony was held at the Edwin Andrews Air Base in Sta. Maria, Zamboanga City.

“These brave soldiers had left us physically but their heroism will remain in our hearts forever,” said Lt. Gen. Cirilito Sobejana, commander of Westmincom.

The eight soldiers were among the 11 government troops who perished in an encounter with the terrorist Abu Sayyaf Group in Sulu province Friday, April 17.

Sobejana said the soldiers fought up to their last breath protecting the people of Sulu from lawlessness of the Abu Sayyaf bandits.

“We pray for the eternal repose of their souls and for strength for the bereaved families,” Sobejana said.