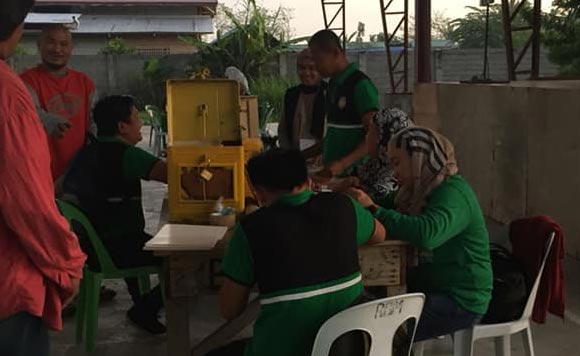 The Commission on Elections (Comelec) on Wednesday said around 75 percent of the voters participated in the second Bansangmoro Organic Law (BOL) plebiscite in Lanao del Norte, except Iligan City, and seven towns of North Cotabato.

“We don’t know yet about how the voter turnout will shape up. But, at least in some places, we’ve already received reports that the estimate is edging up to 75 percent,” Comelec spokesperson James Jimenez told a press briefing.

He said the rumors of security threats but not reports of untoward incidents were recorded.

“There are persistent rumors of armed men coming into the territories… so far no untoward incidents have been reported,” Jimenez added.

He also reported they received reports that 100 percent of the precincts in said provinces have opened to accommodate voters.

“By 8:30 a.m., we received the report of 100 percent of the precincts of Lanao del Norte and North Cotabato opened and functioning,” Jimenez said.

The voting began around 7 a.m. and closed at 3 p.m., but he noted that voters who are at the vicinity of the polling places would still be allowed to vote.

Meanwhile, the Comelec en banc sitting as the National Plebiscite Board of Canvassers is set to convene on Thursday to tally the Certificates of Canvass (COCs) from the said areas.

The referendum was held in the towns of Baloi, Munai, Nunungan, Pantar, Tagoloan, and Tangkal in Lanao del Norte; and in the municipalities of Aleosan, Carmen, Kabacan, Midsayap, Pikit, and Pigcawayan in North Cotabato.

The 28 barangays in the two provinces also sought for voluntary inclusion in the Bangsamoro Autonomous Region in Muslim Mindanao. (PNA)