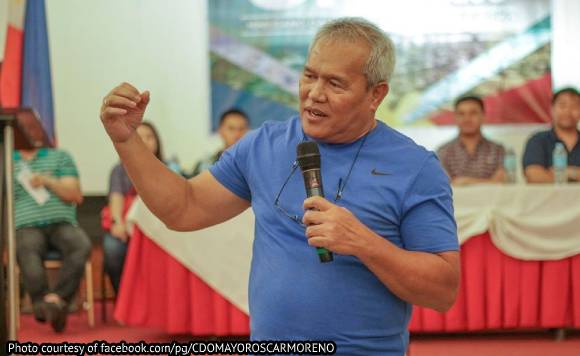 CAGAYAN DE ORO CITY – A total of 50 barangay chairpersons allied with Mayor Oscar Moreno have shown their support for his stand not to place the city under an enhanced community quarantine (ECQ) as they appealed to other village leaders to unite in fighting the coronavirus disease 2019 (Covid-19).

Moreno’s allies were reacting to the petition submitted and signed by 26 of their colleagues, who called on the mayor to declare an ECQ due to fears for the well-being of their constituents after the city registered seven Covid-19 cases.

Barangay Gusa chairman Marlo Tabac said in an interview on Friday that while they respect the concern of the other barangays, they have maintained their support for Moreno.

Tabac, vice president of the city’s Association of Barangay Councils (ABC), said they also want the health authorities to implement measures to combat the virus, noting however that they were not keen on placing the entire Cagayan de Oro City on ECQ.

He provided reporters a copy of their manifesto, which was signed by 50 members of the local ABC chapter.

The city has 80 ABC members representing each rural and urban barangay.

“With ECQ, there are so many guidelines to follow but not everything in it is applicable to the barangays,” Tabac said, adding that the ABC would meet so the village chiefs could come up with a collective decision regarding their stand on the issue.

The manifesto said the function of the village chairpersons is not easy as enforcers of new Covid-19-related government policies, such as those on social distancing, staying at home, and house-to-house health surveillance in their localities.

“As front-liners, we are risking our lives to make sure that the virus will not spread,” it said.

Because of the important role the barangays play in the fight against Covid-19, the majority of the ABC members agreed that all village officials must unite to defeat the public health crisis. (PNA)

Davao City operates 12 ‘COVID-19 We Heal As One Centers’