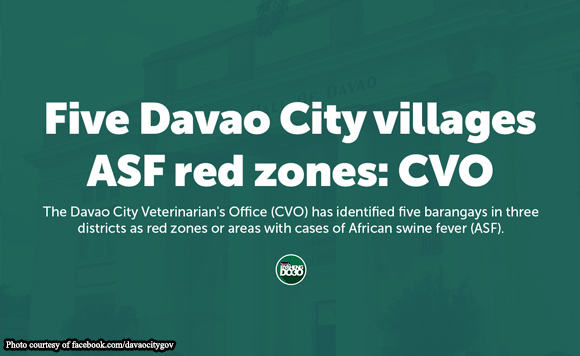 “But some of which are isolated cases and considered to be a case of incursion. Recently, we have isolated cases in Bankas Heights of Toril District but controlled na rin (it has also been controlled) and swine blood sampling within 500 meters turned out to be negative of the ASF virus,” Pallar said.

She said that they conduct weekly ASF disease monitoring and surveillance in all barangays to check if there are new cases of swine mortality.

satellite ACQs are located in Barangays Magsaysay and Dalaglumot in Marilog District, Bosque, Bunawan and Callawa, Buhangin, and Eden in Toril.

RT-PCR test/blood sampling within 500 meters from identified reported areas with swine mortalities and intensive sampling of pork byproducts, such as chorizo in all public markets in the city are also being done.