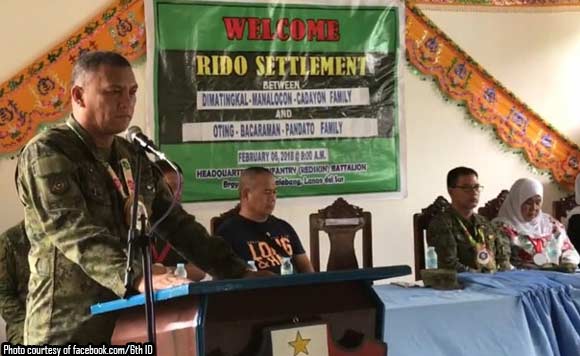 The military on Monday reported that 44 members of the Daesh-inspired Bangsamoro Islamic Freedom Fighters (BIFF) were killed while 26 others injured in the two-day air and ground assault against the group in this province.

Backed by helicopter gunships and armored personnel carriers, the Army’s 6th Infantry Division (ID) launched a law enforcement operations against the BIFF on March 8 and 9 in the adjoining villages of Lower Salbo and Kitango in Datu Saudi Ampatuan town.

The hostilities erupted when troops from the Army’s 2nd Mechanized Infantry Battalion led by Lt. Col. Alvin Iyog clashed with the group of BIFF Commander Peni while conducting Martial Law-related clearing operations at around 6 a.m. of March 8 in Sitio Lapitos, Lower Salbo.

“The firefight was so intense and resulted to slightly wounding of one of my men but they kept pounding them (BIFF) with heavy fires,” Iyog said.

“Our soldiers saw in their naked eyes how the bandits run for their life, leaving behind several IEDs, high powered firearms, ammunition, and personal belongings, all stained with blood,” Iyog added.

“Some of our equipment were also damaged because we have to swim across chest-deep water to get close to the bandits. Cellular phones, hand-held radios and other electronic gadgets were all drenched in water but we have to pursue the fleeing bandits. We know we hit them fatally,” he further said.

Dela Vega said the number of BIFF fatalities was reported to the different units of the 6th ID and validated by the residents of the affected barangays especially those who evacuated from the area.

“Some of them, especially the relatives of the fatalities, even led government operatives to the grave site where they immediately buried their remains,” Dela Vega said.

Carreon said a local official of Datu Saudi Ampatuan was quoted as saying in vernacular that “there could be more BIFF killed because our relatives in the other barangays told us that they spotted some groups who were carrying with them their casualties.”

Dela Vega said the 6th ID is currently realigning its forces to sustain the gains of the troops as it was monitored the BIFF is regrouping its forces.

“I am very determined to defeat the threat groups and thwart them from doing terroristic activities in Central Mindanao,” Dela Vega said.

Abu Misri Mama, speaking for the BIFF, admitted they suffered casualties but way below on the figure the military had released.

“That’s too much, in fact they (Army) suffered 12 killed in action, one armored personnel carrier (destroyed),” Misry said.

Meanwhile, Datu Saudi Ampatuan social welfare officials said more than 500 families have fled their homes and are now staying in various evacuation centers in the adjoining towns of Mamasapano, Pagatin (Datu Saudi), Salibo and Shariff Aguak, which is known to the military as “SPMS Box” in Maguindanao. (PNA)

1,800, including 38 foreigners, sign up for Ironman race in Davao City