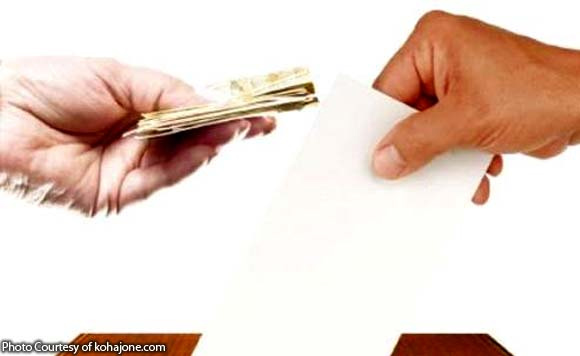 Police Brig. Gen. Eliseo Tam Rasco, Police Regional Office (PRO) 12, said joint elements of the police and military were dispatched at the Barangay Hall of New Kalibo, Mlang town at about 4:30 p.m. Friday, May 10, following a report by a concerned citizen of the alleged vote-buying activity.

The suspects initially hid inside their vehicle after sensing of the arrival of the authorities. A police officer requested to roll the window down, but they refused.

They only came out of the vehicle three hours after when their legal counsel arrived.

“Upon witness’ positive confirmation of the same individuals who conducted the said vote-buying activity inside the Barangay Hall, a search was conducted,” Rasco said.

Recovered from the suspects were 2,660 pieces of one hundred peso bill, amounting to P266,000.00; four sheets of paper with names of person with their corresponding signatures; and a heavily tinted vehicle.

The suspects would face charges for alleged disobedience to authority and vote-buying.