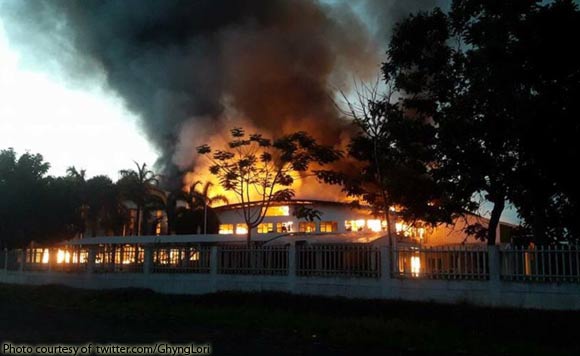 A security guard and a fish vendor were injured in series of attacks launched by the New People’s Army (NPA) in three areas of Davao early morning Saturday.

Tagpore is a boundary area between Panabo and Davao City.

MPI, formerly Agro Plastics, Inc., supplies the requirements of the banana companies under the Lapanday Group.

This was followed by the burning of Lapanday box plant and plastic plant buildings along Tigatto road in Buhangin that resulted to the wounding of security guard Reynaldo Talamaque on his shoulder and stomach.

At around 6:00 a.m., the security guard of Lorenzo Farm, Rico Truz Badil, Jr, appeared before the Calinan Police Station, this city, with a lone injury in the buttocks. Badil told police that at around 3:30 a.m., an encounter occurred in Lorezo Farm, Barangay Pangyan, Calinan where he and three other security guards were attacked by the NPA rebels.

The rebels took away four shotguns and one M16 rifle.

Maj. Ezra Balagtey, spokesperson of the Eastern Mindanao Command, said the attack was part of the NPA’s extortion activities. He said Lapanday management had been receiving extortion letters from the communist groups.

He said the incident could not be connected to the brewing issue between the Lapanday Foods Incorporated (LFI) and the MARBAI farmers over a 145-hectare land previously awarded under the Comprehensive Agrarian Reform Program in 1996.

While the land was successfully turned over by DAR to MARBAI farmers last December 19, according to reports the farmer-beneficiaries were driven out of their own land.

In a press statement released on Saturday, NPA-Southern Mindanao Regional Operational command spokesperson, Rigoberto Sanchez owned up the attacks. He said the three simultaneous tactical offensives against the Lorenzo-owned companies and ranch started at around 2:00 a.m. on Saturday.

“The PBB’s (Pulang Bagani Command) coordinated offensives served as punitive action against the Lorenzos for their numerous crimes against agricultural workers, peasants and Lumad,” Sanchez said.