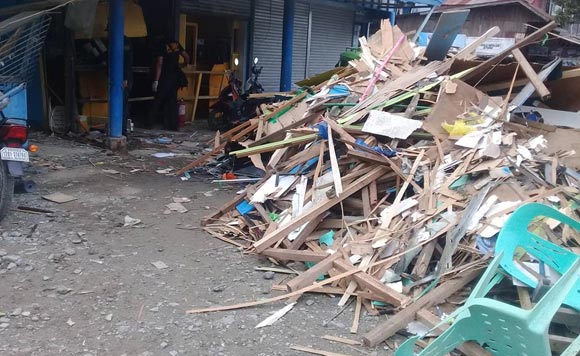 Police have filed murder and multiple frustrated murder charges against 25 leaders and members of the Bangsamoro Islamic Freedom Fighters (BIFF) over the Aug. 28 bomb explosion in Isulan town in Sultan Kudarat province that killed three people and wounded 36 others.

Rasco said Kikay was positively identified by witnesses as the one who planted the improvised explosive device (IED) that exploded in front of the Arco Buy and Sell along the national highway in Barangay Kalawag 3 at about 8:34 p.m.

He said the computerized facial composite generated by the SITG, which is headed by deputy regional director for operations, Senior Supt. Oliver Enmodias, matched a file photo of Kikay in a BIFF uniform while holding a high-powered firearm.

The explosive was placed in a black backpack that was left beneath a motorcycle parked near an “ukay-ukay” (second-hand clothes) store. The incident happened two days before the culmination of Isulan’s 7th Hamungaya Festival and 61st foundation anniversary celebration.

As for the second explosion inside an Internet cafe on Sept. 2, Rasco said SITG “LJ” is “now close to figuring out the real cause” and its perpetrators.

“The evidence gathered by the task group is pointing to the BIFF as behind the two attacks,” he added.
The attack on Liezther James Cafe and General Merchandise in Barangay Kalawag 2 in Isulan past 7 p.m. left two people dead and 12 others wounded.

Rasco presented during the press conference the computerized facial composite of the still unidentified primary suspect, who was of medium build, fair complexion, aged between 27 to 30 years old and 5’4″ to 5’5″ in height.

He said the suspect was last seen with a boy aged four to five years old and was wearing long sleeves with black stripes, faded black jeans, and slippers, and carrying a black pack bag.

Rasco, who only assumed as PRO-12 director last month, said the two attacks were major challenges to his leadership.

He assured that all security measures are in place to properly secure local communities and prevent similar attacks.

Prior to the press conference, the PRO-12 convened the Joint Peace and Security Coordinating Council at the East Asia Royale Hotel here to further strengthen counter-measures to address problems on terrorism.

The meeting was joined by Brig. Gen. Roberto Ancan, the commanding officer of the Army’s 1002nd Brigade.

“We review intently our security plans and conduct regular meetings with other law enforcement agencies, local chief executives and other stakeholders to prevent or once and for all stop these incidents from happening again in the future,” Rasco said.

“We need the community to help us detect any activity that poses threats to our security,” he added. (PNA)