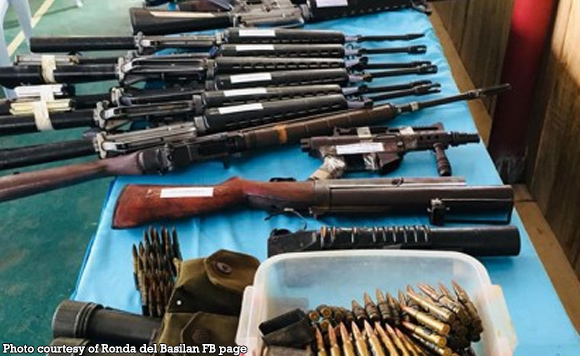 ZAMBOANGA CITY — Two feuding families have settled their dispute after almost six years of sporadic armed confrontations in one of the towns in Basilan province, military officials announced.

Reyeg withheld the identities of the feuding families except that they are from Barangay Lawi-Lawi, Lantawan, Basilan.

The signing of the peace covenant was held at the headquarters of the 4th Special Forces Battalion in Barangay Cabunbata, Isabela City, the capital of Basilan province.

The feuding families, together with the village officials of Lantawan, as a show of support and gratitude to the military, voluntarily surrendered their firearms to dela Cruz.

In turn, dela Cruz formally presented a total of 43 assorted high-powered firearms to Reyeg, during the signing of the peace covenant.

Reyeg, in his message during the ceremony, emphasized the importance of peace and order in the community.

He also affirmed the surrender of firearms by the respective barangay chairpersons as a welcome to peace and development.

He said the proliferation of loose firearms in the community is a contributory factor to the occurrence of feud locally known as “rido.”

The signing of the peace covenant culminated with warm embraces between members of the formerly feuding families.

BARMM gets P500-M to fund separation pay of ARMM employees