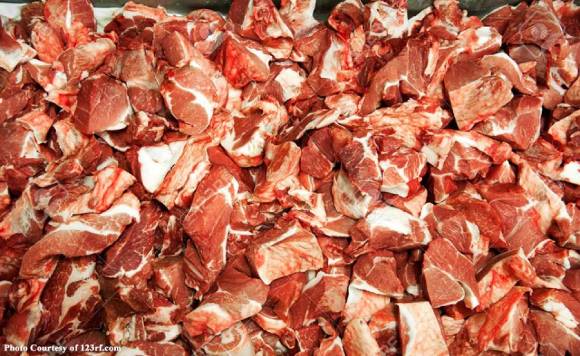 GENERAL SANTOS CITY – Government personnel destroyed on Friday some 2.1 tons of pork and other processed meat products from Davao City that were intercepted in a quarantine checkpoint in Malungon town, Sarangani.

John Pascual, Department of Agriculture (DA)-Region 12 regulatory division chief, said in a report that they decided to immediately destroy the seized meat products due to possible contamination with the African swine fever (ASF).

He said the meat products, which were mostly processed pork, were from a supplier based in Davao City, which recorded cases of ASF outbreaks early this year.

These were found inside a delivery van that was stopped at a checkpoint on the national highway in Barangay Malungon Gamay, Malungon town around 8:35 p.m. on Thursday.

The seized products, which weighed a total of 2,197.5 kilos and valued at around PHP80,000, was reportedly owned by a businessman from Koronadal City and will be delivered to various localities in Region 12 (Soccsksargen).

The delivery van carried a food pass issued by DA and concerned government agencies, giving it access to border checkpoints amid the coronavirus disease 2910 (Covid-19) pandemic.

Pascual said the transport of the meat products into Sarangani was prohibited under Executive Order (EO) No. 1 issued last February by Gov. Steve Chiongbian Solon.

The EO provided for the “temporary ban on the transport of live hogs, pork and pork-related food products” to Sarangani from areas affected by the ASF outbreak in the Davao region.

“We assure the public that we will continuously intensify the precautionary measures against ASF in the region,” he said.

Samples of the meat products were collected before they were placed on a pit and burned.

A report from NMIS-12 said the entry of pork products to the area remains prohibited as they could be “potential carriers” of the ASF.

It said the seized products were reportedly intended for clients in Koronadal City and Surallah in South Cotabato and Tacurong City in Sultan Kudarat.

“Authorities have gathered some pieces of evidence that the people carrying these prohibited items are also supplying some online sellers in the region,” the agency said. (PNA)

No hugs, beso-beso! Duterte visits famlily in Davao City after 2 months in lockdown in Malacanang