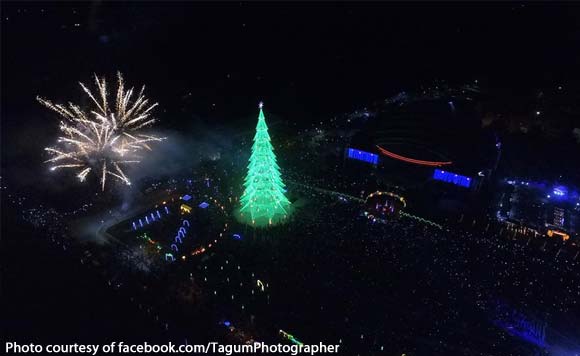 The Tagum City government has lighted the 193-foot Christmas tree, touted as the tallest tree in the country.

Mayor Allan L. Rellon led the lighting ceremony, which was witnessed by about 40,000 people coming not only from the city but also neighboring municipalities Sunday night, December 1.

He expressed hope that the symbolic activity could bring inspiration and hope not only to Tagumenyos but to all Filipinos.

The Christmas tree, which is higher than last year’s 186 feet, has 5,000 bulbs, 23 little stars representing the 23 barangays of Tagum, and the biggest star at the top symbolizing the omnipotent God with eight rays signifying the 8th City Council, the local government said.

“This year’s design is inspired with the Enneagram, a personality test which measures and identifies the nine personalities of people which blink at three different color representing Tagum’s Lumads, Christians, and Muslims inhabitants while keeping its 10 layers indicating the developmental agenda of the city government dubbed as EAGLE WINGS,” it added.

3 Reds from Sarangani surrender to military