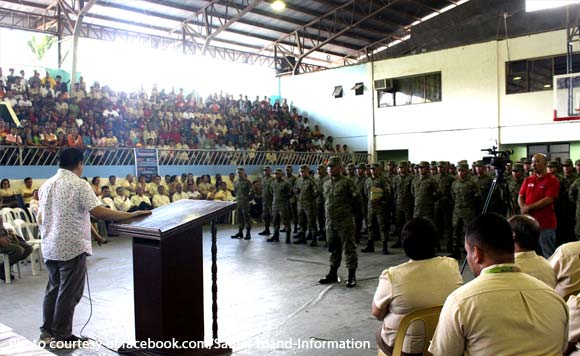 Some 120 individuals have completed the basic military training to become members of the Cafgu Active Auxiliary (CAA) in the Island Garden City of Samal.

The local government said of the total graduates, 66 were newly recruits and 54 were refreshers who all underwent the training held in District Hall, Kaputian District. The training started on November 22 last year until January 6.

“It (CAA) is an augmentation of the government forces to strengthen the campaign against terrorist activities, to prevent the proliferation of communists, and other forms of threats in the city’s peace and order,” the city government said.

The CAA is part of the TF Samal, which performs the all-around duty, including assisting the police.

The visibility of TF Samal to every strategic area plays a significant role since the Island Garden City of Samal has been known as one of the major destinations for local and foreign tourists, said Col. Alexis Noel C. Bravo, commander of TF Samal.

The graduates will be deployed to the seven detachments of TF Samal to monitor and secure all the entry points in the whole Island such as in Kapuitan Poblacion, San Remegio, and Talicud Island, Kaputian District, Barangay Penaplata, and Aundanao of Samal District, Barangay Villarica, and Balet of Babak District, he added