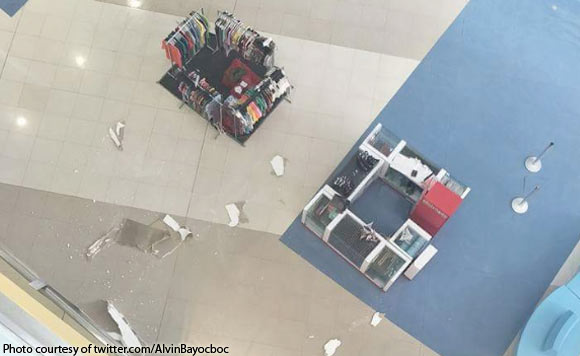 A construction worker from Sarangani province was slightly injured while several government and private structures here sustained minor damages as a result of the 7.2-magnitude earthquake that hit the area at dawn Saturday.

Dr. Agripino Dacera Jr., head of the City Disaster Risk Reduction and Management Office (CDRRMO), said victim Ronilo Gamboa, 34, sustained leg injuries after reportedly tripping on a steel bar while rushing out of their bunkhouse at a construction site in Alabel town in Sarangani at the height of the quake.

Gamboa, who hails from Zambaonga del Norte, was brought to the city government-run Dr. Jorge P. Royeca Hospital here and was treated for minor wounds on his left leg.

“His injury was a result of panic so it is considered related to the incident,” he said in a radio interview.

However in this city, Dacera said there was no reported injury or death as a result of the tremor that shook the area at 4:23 a.m.

He said a “dilapidated” building along Santiago Blvd. here was damaged following the temblor.

The building, which was made of light materials, had long been abandoned and set for demolition.

The official said they also found some minor damages at the city hall building, especially at the entrance and exit areas.

“The damages were mainly on the glass doors. The rest of the structures were stable based on our initial inspection,” he said.

Dacera said all roads and bridges within the city did not incur any damage and remained passable, and there was no reported significant tide changes in the city’s coastal areas.

Residents here and the neighboring areas scampered out of their homes for safety during the quake, which also caused power outages for several minutes in parts of this city and nearby South Cotabato and Sarangani provinces.

Nane Danlag, head of the Philippine Institute of Volcanology and Seismology (Phivolcs) station here, said the quake’s epicenter was traced off the seas of Sarangani town in Davao Occidental.

It had a depth of 57 km. and was tectonic in origin.

Danlag said it was felt at Intensity 5 in this city, Koronadal City, and in the municipalities of Polomolok, Sto. Niño, Tupi and Lake Sebu in South Cotabato.

She advised residents to remain cautious and vigilant as “aftershocks are still expected”.

Phivolcs issued a tsunami warning in the coasts of Sarangani, Davao Occidental and other neighboring provinces but it was cancelled with no occurrence reported.

What holiday? XJ Romualdo on duty for ASEAN delegates